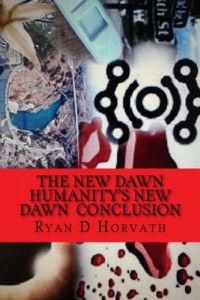 Old faces meet new ones in the smart, chilling, and enigmatic final chapter:

Jack Voight and Antonio Perez each led collections of scared and threatened survivors out of their home cities of Minneapolis and Miami after a stunning revelation during a world changing eclipse. What will happen to their separate groups when they collide at the sanctuary they expect the Hoover Dam to be?

Old mysteries are solved but as they delve into their pasts, new ones quickly manifest leading the survivors in a hunt across the nation once known as the United States seeking things they never would have imagined.

What will they find? Answers? Salvation? Or an unspeakable death?

And what will the future hold??

Join familiar faces along with some new ones and even some surprises as they step into Humanity’s New Dawn!!